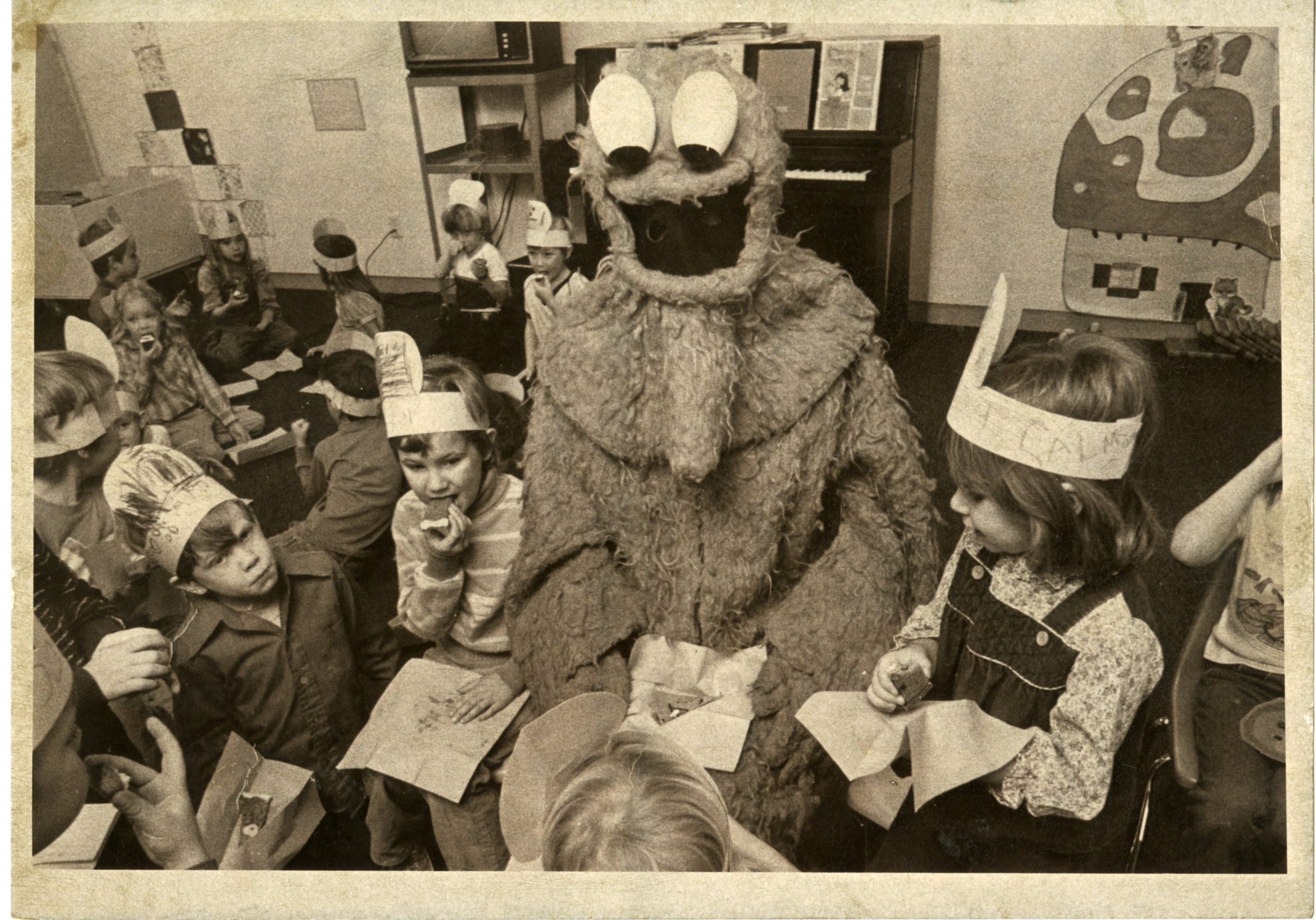 Eileen dressed as the cookie monster delivering to students at Lincoln Elementary. Courtesy of Eileen Harman. 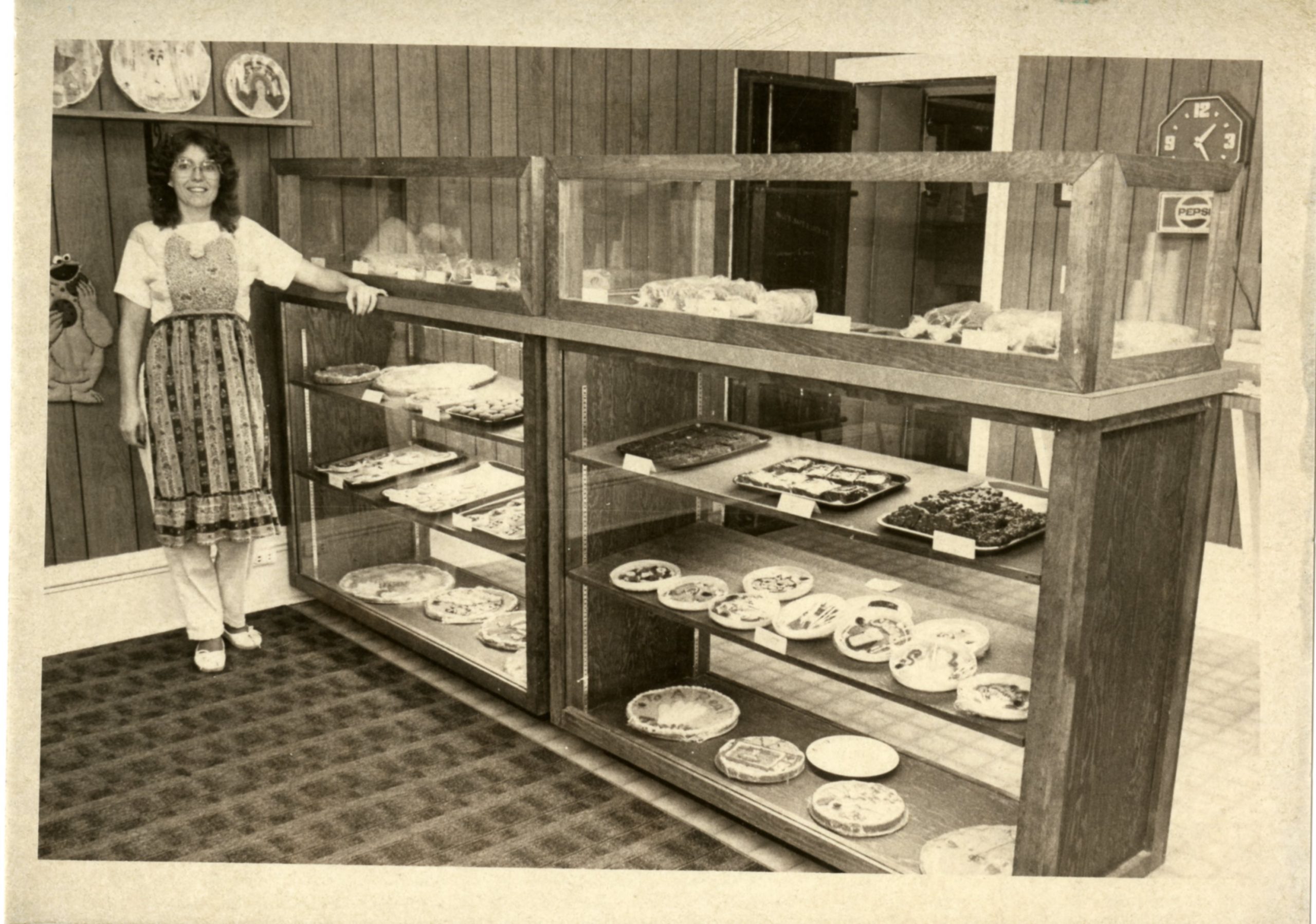 Eileen in her first store, October 1, 1983. Courtesy of Eileen Harman. 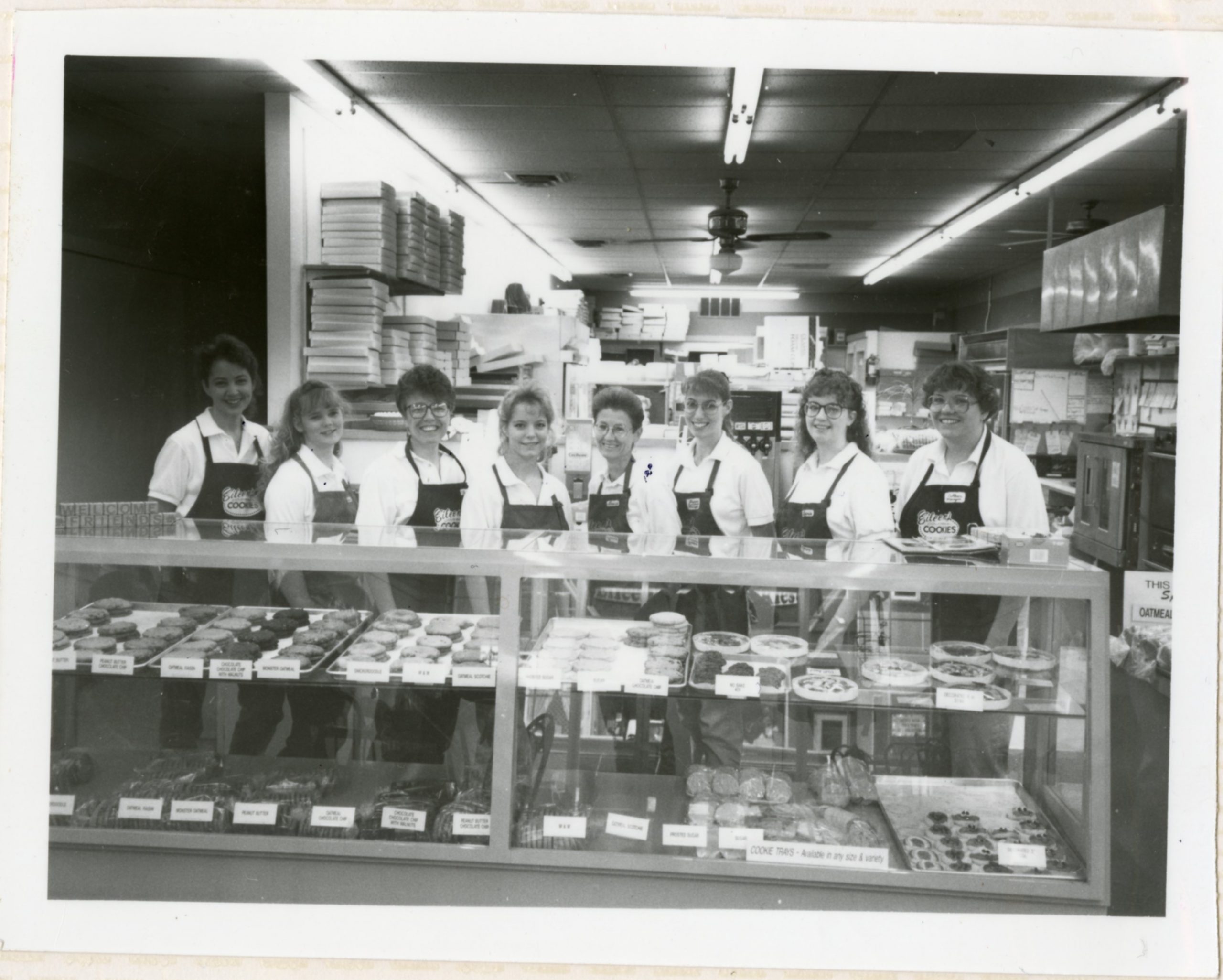 Eileen Harman was born to Paul and Freda Gartner. Her early years were spent on a farm near Glenvil, Nebraska. She attended elementary school in rural Adams County and then Axtell. Eileen’s father left farming and became a real estate agent. The family moved to Hastings, where she graduated from Hastings High School in 1966. After graduation, she completed a nine month course in secretarial work at the Lincoln School of Commerce. She then moved back to Hastings and worked as a secretary for the George Rullman Accounting Firm before deciding to move back to Lincoln.

During the late 1960s, Eileen worked as a secretary for Lincoln Aerospace. The company was working on replacing the radar systems in F4E fighter jets. When the company closed, she found another job but eventually went back to work for her boss from Lincoln Aerospace at a company that built telecommunication towers. She married Tom Harman in 1971. After five years in Lincoln, Eileen and Tom moved back to Hastings to sell real estate at her father’s company, Gartner Realty. The couple have two sons, Gabe and Tony.

On a whim, Eileen took a cake decorating class.

She wanted to learn to bake and decorate cakes for her boys. She had the idea to open a bakery after shopping at the Cookie Factory in Omaha. Eileen was pleasantly surprised to see they had large decorated cookies. She formed a business plan and decorating experience as she began baking cookies in her basement. Eileen used some of her mother’s cookie recipes that she enjoyed while growing up. Other cookie flavors were developed from recipe books, though a great deal of experimentation and adjustment was needed to maintain the flavors in the larger quantities of dough.

Eileen promoted her business through ads in the Tribune and by selling 6″ undecorated cookies at multiple businesses around Hastings. She provided free delivery and checked daily to see if they needed her to bring more. Eileen would even deliver special orders in a Cookie Monster costume, delighting adults and children alike. Eileen’s Cookies were a hit, and in 1983, she rented her first storefront in downtown Hastings. It was located at Second and Lincoln, under Martin Miller’s Travel. After 6 years, Eileen’s Cookies moved into their current location. For 33 years, Eileen’s Cookies has been in business on 2nd Street in downtown Hastings, under the bright colorful awning.

Eileen’s Colossal Cookies expands. With growing popularity, Eileen decided to open more stores. First in Grand Island in 1987, and four years later in Kearney. Two years after the Kearney store opened, Eileen was approached by a couple from Cheyenne, Wyoming, who wanted to open a franchise store. The couple’s parents lived in Kearney and loved Eileen’s Colossal Cookies. The business had not expanded past Kearney because Eileen could not drive to check on each store in a day. Starting a franchise was a great solution. Since then, Eileen’s Colossal Cookies had opened franchise stores in 8 other states – Colorado, Oklahoma, South Dakota, Kansas, Texas, Minnesota, Iowa, and Missouri for a total of 25 stores.

Eileen still resides in Hastings. She is involved in the daily operations of her businesses in Hastings, Grand Island, and Kearney. She provides advice and some assistance to the franchises on an as-needed basis. Her sons, Tony and Gabe, are also very involved in the business. Tony is Vice President of Sales while Gabe is Vice President of Operations.